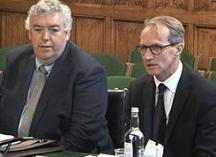 Last Wednesday morning, from 9.30 am, IP Draughts and Daniel Nelki of Wellcome Trust spent an hour answering questions from the House of Commons’ Science and Technology Committee, in relation to their investigation on the subject “Managing Intellectual Property and Technology Transfer”. A recording of the event can be found on the Parliament TV website here.

With recent experience of giving evidence to a House of Lords committee, IP Draughts knew roughly what to expect, which reduced the stress levels considerably. He is grateful to Iana Vidal of the Law Society’s public affairs team, who chaperoned him during both of his recent visits to Parliament. Daniel had his own chaperone, from the Wellcome Trust’s public affairs team. IP Draughts wonders how many people give evidence to Parliamentary committees without such a supporter. He suggests that the Parliamentary authorities should ask witnesses whether they will be accompanied, and offer such a service to those who attend on their own, including collecting them from outside Parliament, guiding them through security, escorting them to the committee room, and making conversation with them until they are called in to be grilled.

The committee rooms in the Palace of Westminster are on the second floor, all overlooking the river. Next to them is a corridor, several hundred yards long, with an entrance half-way down. To the left of this entrance are the Commons’ committee rooms, many of which are named after former Prime Ministers. To the right, the Lords’ committee rooms. The rooms themselves (or at least the two IP Draughts has seen) are Victorian, wood-pannelled, tall-ceilinged, and well-designed for public conversation.

The other main point that IP Draughts learnt, and he is still recovering from this insight, was that after the evidence hearing had finished, several MPs rushed to have a selfie taken with Dame Ann Dowling. No-one asked IP Draughts for a selfie.

If you watch Dame Ann’s evidence, you will see one of the committee members asking her, a little sycophantically, whether she can remember all the initials and qualifications that appear after her name. No-one asked IP Draughts this question.

While he cannot compete with Dame Ann’s academic and professional eminence, for the record, IP Draughts received in the post this week a certificate from the European Union Knowledge and Technology Transfer Society stating that IP Draughts has been awarded the title of Expert. One of IP Draughts’ partners reminded him that, according to a former Lord Chancellor, “we have had enough of experts“, and that he might want to keep quiet about this EU qualification.

4 responses to “Lessons from visiting Parliament”