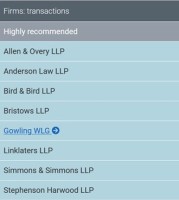 Not a bad group to be in…

The latest edition of IAM Patent 1000’s rankings of patent law specialists has just been published.

It’s good to see that there are a few new names on the list. Though, due to the long lead time before publication, some others on the list have retired since IAM did this year’s research, eg Edward Nodder of Bristows.

A quick scan of other jurisdictions reveals that some of IP Draughts’ friends and colleagues in other countries have been recommended, or re-recommended. Pam Cox of Chicago, USA, Denis Schertenleib of Paris, France, and Christine Kanz (Germany) are leading examples.

While rummaging among the innards of this blog – the ‘dashboard’ that gives statistics on what has been read, where the readers are from, and so on – IP Draughts noticed that a couple of people had downloaded an article that he had written in about 1992 – one of the first that he published, though he can’t now remember where.

The article concerns an old House of Lords case on the interpretation of a patent licence agreement: Fluflon Limited v. William Frost & Sons Limited (1966) FSR 184. Looking back over nearly 30 years since he wrote the article, the main point IP Draughts now takes from the case is the importance of precise, meticulous drafting in IP agreements, particularly on major issues such as which products are royalty-bearing.

IP Draughts comes across an argument, raised even in comments on this blog, that if business people are happy that they know what they mean by contract wording, lawyers should not interfere too much or raise ‘academic’ arguments about legal interpretation.

This is not IP Draughts’ approach. He thinks it is part of a good lawyer’s role to stress-test negotiated wording and (unless instructed otherwise, or the scale of the deal does not justify it) to raise whatever objections occur to the lawyer, to make the wording suitable in light of the client’s commercial objectives and the underlying law.

A link to the article appears on the second page of this site – not this page, which contains all the blog articles but a separate page that has links to most of IP Draughts’ articles in journals and magazines.

IP Draughts writes articles occasionally, fitting them around client work, teaching, updating books, and other roles. He thinks it is time to write another one, and would welcome suggestions for a topic.

Where this article would be placed is less obvious to IP Draughts. It is a broader subject than articles  on IP contracts, which IP Draughts has tended to place with JIPLP.

If you have any suggestions for articles, or if you know someone who might be interested in working with IP Draughts as a research assistant (perhaps someone in the early stages of an academic law career), he would be interested to hear from you.

A recent client project has reminded IP Draughts what it is that he enjoys most about working on IP-related agreements.

It is several things. Working with clients to identify the issues that are important to them in a transaction or relationship. Part of this is having clients who “get” the points that he is making, and can take decisions on them. Often, he and they will mutually decide to ignore less important issues. Taking a draft – either his or one presented by the other side in negotiations – and modifying it to reflect the client’s priorities. Perhaps adding helpful or persuasive comments to a draft, as well as marking it up with changes. Then working through the changes with the other side, listening hard and problem-solving to to find solutions that meet both parties’ objectives; as part of this, ensuring that the drafting is clear, accurate, concise and consistent.

Part of this work is an exercise in diplomacy – with one’s clients and with the other party – getting the tone right in written and oral communications, being appropriately assertive without being aggressive, and so on. This is the hardest part of legal practice, and one which junior lawyers sometimes struggle with.

The technical drafting work shares some qualities with solving puzzles, such as those that appear nowadays in the back of newspapers. As well as “pure” drafting skills, you may need general knowledge (about the industry, client or deal type), or a good command of words, or a good sense of logic.

Throughout this process, many judgment calls need to be made – on what to press for, and what to concede, on when to get the drafting right and when to accept imperfection, and on how best to communicate – smoothly and elegantly, or forcefully.

This approach doesn’t work with all clients, but over time you build up a practice that suits your skills and personality. Some clients have no interest in the thoughtful approach described above, and just want their lawyer to use every technique available to impose their will on the other side. Others have no interest in engaging in detail. Some just want someone to blame if it goes wrong. While IP Draughts can accommodate all of these preferences, some better than others, they wouldn’t necessarily be his first choice.

This week, IP Draughts has been working with a client whose approach seems to be well aligned with his. It makes for an enjoyable working day.

The Covid 19 pandemic has brought out the best, and sometimes the worst, in people. While this is happening all over the world, IP Draughts is most conscious of it in his home country, the UK. He thanks the thousands of UK-based doctors, nurses and other healthcare professionals who are putting themselves in danger to help the millions of people who either have contracted the disease, or are at risk of doing so.

He is particularly proud of his sister, who has been a nurse for 40 years, and whose duties have recently changed as a result of her hospital’s new role in the pandemic. She is on shift today, and he hopes that she will continue to get the personal protective equipment that she needs.

Next, he would like to thank the individuals among his firm’s clients who are medically-qualified and have gone back into medical practice during the pandemic. He also applauds individuals who are doing voluntary work with hospitals and research organisations. Equally commendable are those individuals who are raising money to support medical treatment, including 99-year-old Captain Tom Moore, who has raised £13 million for the NHS.

He is proud of his colleagues in Anderson Law who have been providing legal support to urgent projects related to Covid 19, including drafting agreements and advising on related issues such as GDPR compliance. The subject-matter of those projects has included funding agreements for the research and development of vaccines, (free) licensing of the design of ventilators, and the creation of a population tracking app.

When the pandemic is over, we may find that people have become used to new ways of doing things. Yesterday, IP Draughts saw a routine injection being administered in the car park of a doctor’s surgery, with the patient sticking their arm out of the window of the car for the practice nurse to apply the needle. Drive-through medicine! Court cases are now being conducted remotely, with judges suddenly learning how to use Skype, after years of institutional resistance to innovations of this kind.

IP Draughts hopes that, once the immediate crisis is over, there will be increased funding and recognition of essential services, including healthcare, education, and the courts.