Who does IP Draughts think he is? 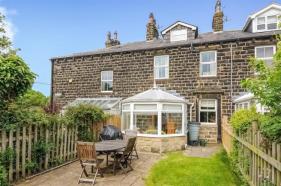 Information about 1 Cragg View is difficult to find. But 2 Cragg View sold for £285,000 in 2015. The area is now a retirement/commuter village with ready access to Leeds.

Health warning: this posting is not about IP.

IP Draughts has  been sorting through some papers of his late mother. They include press clippings about his ancestors, Mr and Mrs Edward Cooper of 1 Cragg View, Addingham, in Yorkshire.

The first of these is an extract from a newspaper dated February 1917, which mentions their golden wedding anniversary and states that they are both aged 71.

Two more articles are dated February 1927 and celebrate the “diamond jubilee” of their wedding. One of these refers to the couple’s “pleasant but retiring dispositions” and their wide circle of friends. More remarkably, this article reports that Edward worked in the same saw mill (William Brear and Sons) from the age of 9 to the age of 75. At 14, he was apprenticed as a wood turner, and he later became an expert chair maker. In the article he is asked whether the arrival of the railway some years earlier had changed the town of Addingham (he thought not). He recalls the opening of his methodist church “in the early sixties”. In other words, the 1860s. The article mentions that one of his sons is a talented violinist, who has settled in Dallas, Texas, and another is a church organist.

The final article, dated 1928, records his death at the age of 82 and his interment at the Wesleyan Cemetary (presumably also in Addingham). This article appears to be from a church publication. It mentions that he was a generous host to visiting preachers, and that “in all his tasks, done in the quieter ways of life, he strove for perfection – nothing less.” He left 3 sons, 3 daughters, and 14 grandchildren.

Expertise, striving for perfection, helpfulness, quiet cheerfulness: a great set of virtues to pass down the generations.

Postscript: IP Draughts has done some further digging, and has the impression that Edward’s employer, William Brear, was a significant influence in his life. Brear was a few years older than Edward, and was a leading citizen of Addingham; a blue plaque was recently placed on his former house in honour of his life. This newspaper article mentions that Brear was a “long and active supporter of Mount Hermon Chapel”.

This leads IP Draughts to ruminate that the gentle virtues mentioned above are not always enough to succeed in life: they may need someone of influence – a patron – to recognise them.

2 responses to “Who does IP Draughts think he is?”