Contract drafting wars: who will win? 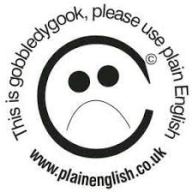 Once upon a time, business contracts were short and simple. Before the time of photocopiers and personal computers, contracts had to be written out by hand, typed on manual typewriters, or sent off to a printing firm to prepare final versions. The limitations of the technology encouraged brevity.

As did the fee structure. Before the billable hour, lawyers charged a rate for the job. IP Draughts’ former firm, Bristows, has records dating back to the nineteenth century; these include an invoice for its work on licensing a version of the electric telegraph for the United States territory. The invoice stated a rate, if IP Draughts remembers correctly, of “six shillings per folio”. In other words, it was a fee per page of the final contract. Not quite charging by the word, but close. A fee system of this kind is likely to make the client apply pressure on the lawyers to be brief.

Similarly, IP Draughts has seen artiste contracts for Hollywood stars of the 1930s that were only two or three pages – much shorter than today’s versions of the same contracts.

When IP Draughts started in practice in the 1980s, business sale agreements were sometimes in the region of 30 pages. Nowadays they tend to be many times that length. The pressure from some clients, e.g. buyers of companies or professional investors, is to address all conceivable risks and try to pass them on to the sellers. They will blame the lawyers if a risk is not addressed. This can result in monstrous contracts.

While contracts have grown in susbstance over the last 30 years, there has also been pressure in the UK to make the drafting more modern and clear. The Campaign for Plain English was one of the early advocates. Techniques for clear drafting were taken from seminal texts such as The Complete Plain Words by Sir Ernest Gowers. Resistance to modern drafting has now all but evaporated among English business lawyers. This doesn’t guarantee that contracts will be well written, but it provides a healthy context for those us who teach the subject. 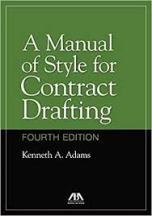 A pressure in the opposite direction has come from the increased use of US-style contract wording in many international business contracts. The USA has been slower to adopt modern drafting techniques, and many of the templates that are seen are full of turgid, archaic wording and (US) lawyers’ jargon. Ken Adams has almost single-handedly campaigned to improve US contract drafting over the last 15 years. At the core of his work has been his magnum opus, A Manual of Style for Contract Drafting, published by the American Bar Association. Now in its fourth edition, it has grown to nearly 600 pages, and is a comprehensive guide to clear drafting. Ken is currently working on an abridged version, which will be an introduction to the subject.

He tirelessly travels across the world teaching and advocating for clear drafting. But it is a labour of Hercules for one person, particularly in the US legal market which by some measures is about 10 times the size of that in the UK.

Ken is very clear that his focus is on the “how” and not the “what”. In other words, he is concerned with expressing contractual obligations as clearly as possible, but leaves it to others to decide what those obligations should be.

And of course both of these factors affect whether a reader of a contract can understand the contract terms. You can write a 100-page contract with beautiful clarity of expression, but it will still be overwhelming to some, or perhaps even all, of its readers.

Thus, Ken’s efforts are an essential component of making contracts easier to understand, but they are not enough on their own. There also needs to be an appetite for simplifying the substance of the template agreements that are commonly seen in business transactions. This requires decision-makers in companies and other organisations to take responsibility for that substance, and to pressurise their contract lawyers to focus on key business risks rather than take a comprehensive approach.

And this is increasingly the battleground of the contract wars. The combatants sometimes shoot down their allies in “friendly fire”. Ken’s work has been criticised recently by an organisation known as IACCM. The International Association for Contract & Commercial Management has the strapline “enabling organizations and professionals to achieve world-class standards in their trading relationships.”

Sally Guyer, global CEO of IACCM, recently posted an article on LinkedIn that provoked a considerable amount of comment about what contract drafting should be trying to achieve. It was perhaps not surprising that Ken reacted to the following comment in Sally’s original article:

Designing contracts for users equally demonstrates a level of social inclusion that is so powerful and necessary today. If you have the time and inclination to read Ken’s 600 page tome – enjoy! For those looking for more practical and bite size solutions to designing contracts for users, however complex the transaction, IACCM’s Contract Design and Pattern Library is worth a look.

In response to a comment from Ken on this statement, she wrote:

We certainly acknowledge the work that you do as a component of simplification – it just doesn’t go to the level that modern society requires and increasingly demands.

Another commenter wrote in the same thread:

Can it be that difficult to express intentions clearly? Or do we really need a 600 page manual to be able to do so?

In IP Draughts’ view, these criticisms are misplaced. By all means say that the substance of contracts should be simpler – but that criticism should be directed primarily at decision-makers in businesses (and their professional investors) rather than their lawyers, even if the latter are sometimes complicit in following the status quo. It should certainly not be directed at Ken.

And by all means say that many users of contracts are not good at words – the essence of traditional contracts – and need more visual explanations such as flowcharts and diagrams. Direct that criticism at companies who don’t invest enough time in explaining their deals to those who have to manage them at an operational level.

It is true that contracts are based on words, and that if the contract comes before a court, the judge and the advocates will be using their advanced-level skills with words – oral and written – to argue and decide the case. And this may be a very different approach to that taken by some business managers when they try to work with the contract.

But does this all add up to a valid criticism that we don’t need A Manual of Style for Contract Drafting or the lessons that it contains? In IP Draughts’ view the answer to this is a resounding no. We may need more than Ken’s work, in the form of a different approach by people in the business world to the deals that they strike and how they integrate them with the needs of operational managers. But we still need  a disciplined use of language, and we still need an advocate for stripping out the lawyerisms and turgid language from contracts.

IP Draughts reads in IACCM’s approach a dismissive approach to someone who is a natural ally. Demanding “bite sized solutions” is fine as a rallying cry in a consumerist world, but it fails to engage with the necessary hard work involved in making things simple. It is ironic that if you read the pages of text that introduce the IACCM “pattern library” mentioned above, they include extensive disclaimers that they are not offering a simple, plug-and-play solution and that the reader will need to do their own work to make effective use of any pattern that is offered.

To repeat the often-quoted line: “I’m sorry this letter is so long, but I didn’t have time to make it shorter.”

2 responses to “Contract drafting wars: who will win?”